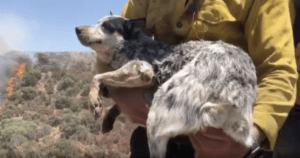 The Apple Fire in California caused plenty of fear to those living nearby. Greg Skeens and his dogs had to watch the flames burn from right outside their window. He worried that the fire would destroy his cabin, but little did he know, there was something even worse to worry about. As the fire got closer, Skeens’ Blue Heeler named Buck got curious. Before Skeens could stop him, the dog had already run off into the fire. Skeens thought that … Read more

The post Man Reunited With Dog He Thought Died In Wildfire appeared first on iHeartDogs.com.