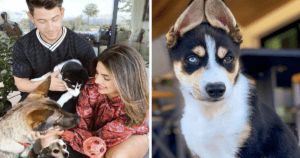 Nick Jonas and wife Priyanka Chopra Jonas are both proud dog parents. Chopra Jonas has had a little dog named Diana since before they got married. Then, as an anniversary gift, she got a German Shepherd named Gino for her husband. They love their furry family members, but they soon realized there was room in their hearts for yet another lovable dog. So, they recently introduced a third rescue pup, and he’s so precious! He has the cutest ears and … Read more