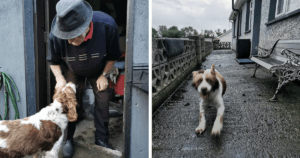 85-year-old Sean Garrigan feared that his Springer Spaniel named Brandy had been stolen. The 12-year-old pup had never tried to run away before, so Sean suspected that something was very wrong when the loyal dog vanished. Sean and his son, Aidan, searched long and hard to find Brandy. Yet, all hope seemed lost as weeks went by. Sean was heartbroken without Brandy, and he tried not to get his hopes up. But while he was fearing the worst, Brandy was … Read more

The post 85-Year-Old Man Reunited With His Best Friend A Month After He Disappeared appeared first on iHeartDogs.com.