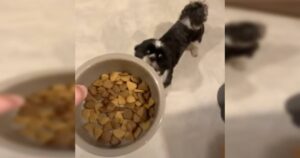 Our poor dogs get stuck with the same old dog food for dinner while we feast on delicious human food nearby. Can you blame them for begging? Once you’ve had a little taste of the good stuff, the kibble doesn’t seem nearly as exciting. One YouTuber discovered a pretty clever way of spicing up “boring” dog food for his picky pup. This little Shih Tzu named Nitro prefers things that come from the fridge. That’s where all the good food … Read more