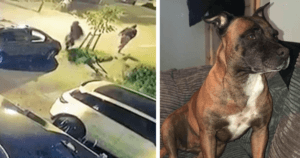 Have you ever wondered what your dog would do in the event of an emergency? Most dogs bark at everything possible, but it’s difficult to tell if they would actually protect you from a burglar or not. For one family, this hypothetical situation became a reality when four thieves with machetes tried to break into their home one night. But little did those burglars know, a loyal dog named Macey was waiting for them. When they tried to enter the … Read more