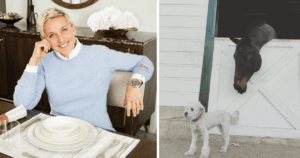 Ellen Degeneres is known as a huge dog lover, especially when it comes to rescue pups. She and her wife Portia de Rossi had four adorable rescue dogs and three cats. Their oldest pup was a Poodle Maltese mix named Wolf. Wolf had been with Degeneres for over a decade. He was there for many of the biggest moments in her life, including her wedding day in 2008. He brought so much joy to the couple and they seemed to … Read more