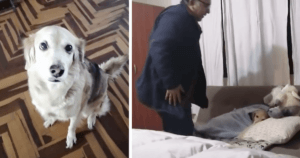 Dads are notorious for saying they don’t want a dog. Then, when they actually get to know a dog, they fall in love. Many of them won’t admit it, but they were wrong about not wanting a furry friend in the first place. For one particular father, he had a specific reason for not wanting a dog. He recently lost a four-legged family member, and he insisted that he didn’t want another. His daughter, Alice Garrido Gallardo, knew the truth, … Read more