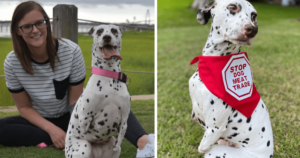 Emma Roo the Dalmation has been through more than you can possibly imagine. Born with a small toe defect, she was abandoned by breeders as a puppy. From there, she ended up in a Chinese dog meat slaughterhouse. Thankfully, in 2017, Emma was rescued from a slaughterhouse in Xi’An. But by that time, her front legs had been removed, the tips of her ears were shaved off, and part of her tail was missing. The poor girl was only about … Read more

The post Dalmatian Whose Legs Were Cut Off In A Chinese Slaughterhouse Rescued appeared first on iHeartDogs.com.