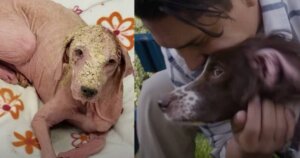 Matt Bentley was riding his four-wheeler through the salt flats in Utah one night. Suddenly an animal appeared in the middle of a trail, so he stopped. His trip to Great Salt Lake Desert took on a new purpose when he saw the mysterious animal up close. It turned out to be a cold, starving, hairless dog. The dog was suffering from one of the worst cases of mange imaginable. Bentley obviously worried about the dog’s condition, so he got … Read more