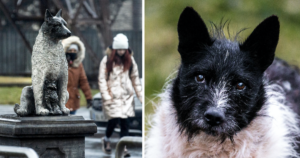 Zorik isn’t your typical dog. He doesn’t want humans to pet him, cuddle him, or even be near him. So, for many years, he spent his life as a stray in Estonia. To many, it might sound like a lonely life, but he was anything but alone. He befriended other stray dogs and cats, and most importantly, he won the hearts of many people in the area. Soon, everyone knew him by name, so they came together to keep him … Read more

The post Free-Spirited Stray Dog Gets His Own Statue appeared first on iHeartDogs.com.