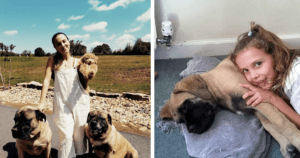 Actress Millie Bobby Brown has been around dogs her whole life. Her family had three Mastiffs named Dolly, Ronnie, and Reggie, along with a Poodle named Winnie. All the dogs were clearly a huge part of Brown’s life. Unfortunately, the 16-year-old Stranger Things star recently said goodbye to Dolly, who had been with their family for 9 years. Most of Brown’s life had been spent with the loyal pup by her side. So, she found the perfect and most emotional way … Read more

The post Millie Bobby Brown Mourns The Loss Of Her Mastiff With Emotional Video appeared first on iHeartDogs.com.