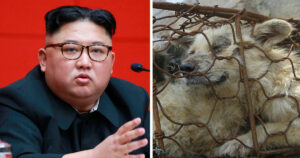 Just when it seems like the dog meat trade is becoming smaller, something terrible occurs. North Korea has never been a dog-friendly country, but many families still had beloved animals living in their households. Now, Kim Jong Un has banned family pets, and he’s rounding up all the dogs in the country. Many families are outraged and heartbroken, but what’s worse is where these dogs will be going. The ban took place in July, and now, during the country’s food … Read more