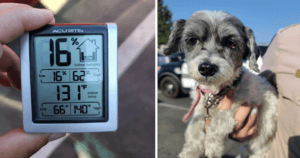 Dogs and children should never be left unattended in a car, especially when the sun’s shining down on them. For most people, this is common sense. Yet, others don’t think twice about it, which puts so many innocent pups in danger. Boomer the gray puppy was a victim of heat exhaustion. Sadly, his so-called parent left him alone in hot car in California, where it was about 100 degrees Fahrenheit outside. Boomer had no choice but to cry for help. … Read more