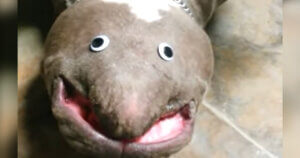 Pit Bull lovers know all about those floppy Pittie lips. Those droopy things tend to flap all over the place when a Pittie runs, jumps, and rolls around. They look especially adorable when the dog lies down. One gray and white Pit Bull who likes to lie on his back inspired his person to make art. All it took was two craft-store googly eyes placed gently underneath the Pit’s chin. These little additions turned a floppy-lipped back-sleeper into… some sort … Read more