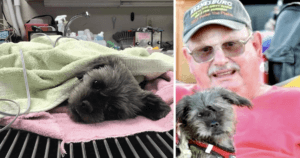 71-year-old Clyde Simmons was on a road trip from Maine to Colorado to visit his family. His two beloved Shih Tzus were riding with him. At first, it seemed like a fun trip for the three of them. But then, they met an unfortunate event while driving through Illinois. The trailer that Simmons was towing suddenly broke. This caused his car to flip over and crash. Simmons and one of the dogs were given immediate care. However, his younger dog, … Read more

The post Recovering Man Is Overjoyed When Dog Lost After Car Crash Is Found appeared first on iHeartDogs.com.