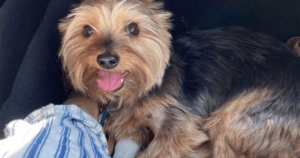 A couple went out for a hike in Pennington County, South Dakota with their 11-year-old Yorkshire Terrier, Bear. They encountered a rattlesnake along the trail. Bear did not hesitate to come between his humans and the venomous snake. The little dog was bitten while saving his people. Dog Alerted to a Silent Rattlesnake on the Trail Bear may be small in stature, but he is big on courage! Devin Diede and his wife, Alex were trekking along when suddenly Bear, … Read more

The post Small Senior Dog Takes On Rattlesnake To Defend His Humans, And Wins appeared first on iHeartDogs.com.