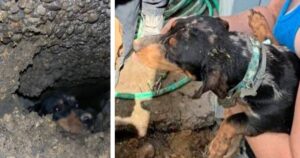 A mischievous wiener dog is safe and sound thanks to firefighters in Beaver Falls, Pennsylvania, and the deliciousness of pepperoni. Winston the Dachshund became trapped under a building after escaping his yard. The pup normally wears an electric fence collar, but on this day, owner Sarah Masters’ other dog chewed it off while she was at work. Masters had been searching for Winston for a half-hour when she discovered his predicament. “I kept hearing him bark and finally realized that … Read more

The post Trapped Dog Is Rescued By Firefighters & A Handful Of Pepperoni appeared first on iHeartDogs.com.