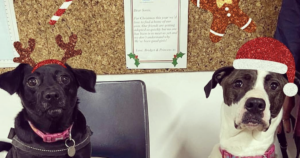 Every December, dogs all over the world sit at shelters, wishing they had a home for Christmas. These dogs have often been overlooked for months, and sometimes even years. Shelters and rescues try their best to make Christmas as special as possible for the dogs in their care, but it’s never the same as having a forever family. This year, dogs all over the United Kingdom are speaking up. They wrote letters to Santa, asking him for a forever home. … Read more