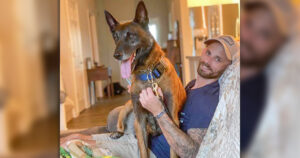 Many U.S. soldiers that serve alongside four-legged comrades often find that their time together is cut short. It’s not uncommon for military dogs to be separated from their handlers after deployments end. While many of these servicemen and women try desperately to adopt the dogs that they’ve worked with, the harsh reality is that it doesn’t always go as planned. Mark Lee Jr. knows the struggle all too well. Partners In War Separated By Circumstance Lee served in the United … Read more