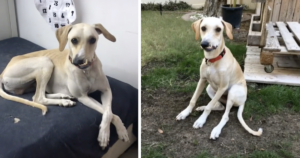 Johanna Handley thinks Alan the Saluki/Boxer mix is the most beautiful dog she’s ever seen. So, she knew she had to adopt him on the spot! But sadly, not everyone sees the 1-year-old pup for his true colors, and instead, they judge him at first glance. Lots of bullies have called Alan “ugly” and suggested that Handley “fix his face.” But Handley loves Alan the way he is, and she wouldn’t trade his gorgeous face for the world. To help … Read more